That I love baking is no secret but what I most love to bake is pie.  Any kind of pie: strawberry rhubarb, apple with cheddar cheese crust, chess, hand pies, even peach pie with gluten-free crust.  I love that there are now blogs dedicated solely to pie and bakeries that make nothing but, there was even a whole week dedicated to the subject on NPR.

There were two things I had always wanted to try with pie but hadn’t up until last week and that was to make crust the old-fashioned way, with lard, and secondly to use a pie bird as the venting method.

Lard is rendered pork fat so is obviously out for vegetarians and vegans and has also gotten a bad wrap for being high in fat, but it turns out it might not be as bad as once was thought.  It actually is lower in saturated fat than butter.  Not that I’m throwing the baby out with the bath water on butter anytime soon but lard might have its place in modern cooking too.  It was easy to find a tub of it at my food co-op and was very easy to work with making the dough.  I will for sure experiment with it more in the future.  The pie bird was cute and also easy to work with but I will likely go back to my mom’s method of cutting the initial of the pie fruit with a butter knife into the top crust.  It’s more nostalgic for me than the pie bird even though they’ve been around for ages. 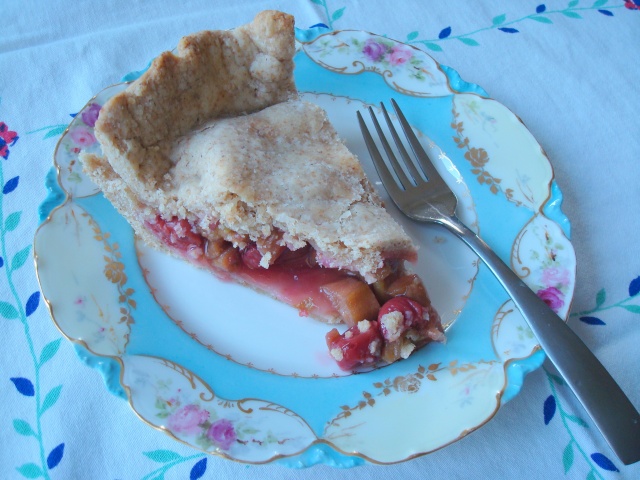 The filling for this pie consisted of what I had on hand in my freezer which happened to be cherries and rhubarb.  What a great combination!  It’s like when you make soup out of what you’ve got in your veggie drawer and it turns out unexpectedly amazing.  Love it when that happens.