How can it be Labor Day weekend already?  Didn’t summer just get started?  Just a few weeks ago I bought raspberries, blueberries, cherries, and yes even strawberries at the farmer’s market and now the only fruit I can find there is apples?  What???

No matter.  I didn’t let a little lack of fruit at the farmer’s market stop me from making something I wanted to ever since I saw a picture of it in July’s Bon Appetit magazine: hand pies.  And not just one batch of hand pies– I went full-on and did a double batch for a bbq I attended and made both blueberry and cherry varieties.

And what does every pie start with?  Crust of course.

I made a lot of crust.  I knew there were going to be a lot of people at the bbq and since the recipe only made 12 individual pies I didn’t want anyone to feel left out so made 24 little hand pies.  What was I thinking?

The making of the crust was pretty simple, as was the making of the fillings.  In general, I find pies to be one of the easiest and quickest desserts to make and the thought of individual pies just seemed so quaint and fun that I couldn’t help myself.

I had visions of wrapping them all cute in individual wax paper bags and serving them from a basket lined with a vintage dish towel with some fun floral pattern on it.  Sounds lovely and charming, right? 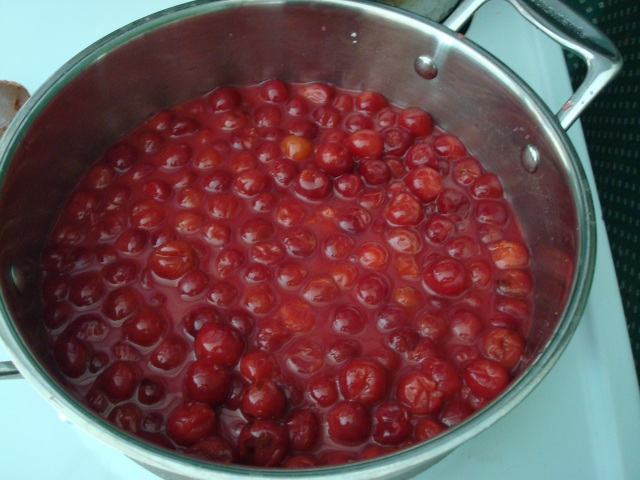 A word to the wise: do not make these when you are slightly pressed for time.  Also it’s probably a good idea not to make them the first time you meet your future in-laws, say, or when you’re trying to impress your new boss.  Neither of those things was the case with me, I’m just trying to think of scenarios when it might not be a great time to try something so meticulous as crafting hand pies.

The rolling out of the dough and the slicing up into squares went well.  Dropping filling onto the squares even went pretty well, too.  (Note the below image was the last batch I put together.  The first few go-rounds were definitely not so photo-worthy…)

I’m a generous person and I want everyone’s pie to have a generous portion of filling.  That is not a good way to think when making hand pies.  A little dollop will do in this case.  Anything more than that will ooze out the side of the pie and prevent you from being able to seal it.

Sealing the pie is key.  Above is one of the few pies that actually looked halfway decent.  Below you will see the finished product when pies are not sealed properly.  Not the prettiest, but thank goodness for that parchment paper.  That saved me from having to scrub the baking sheets afterwards.  Thank you parchment  paper! 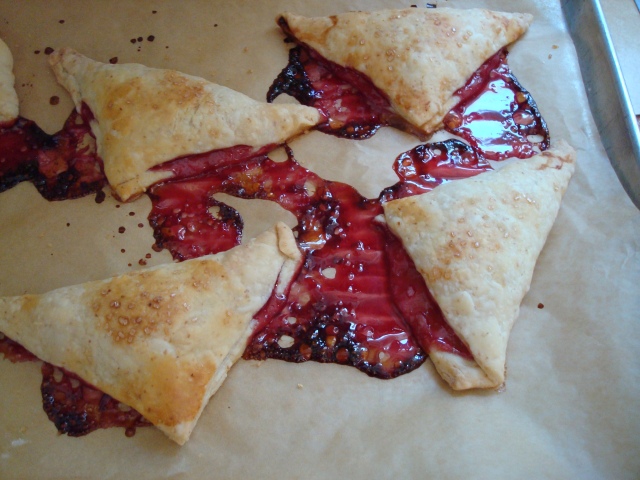 Fortunately the pies were not so unattractive once peeled off the parchment paper.  In fact, they were even kind of cute.  I ran out of time for the whole wax paper bag thing, but in the end it didn’t really matter– they were a hit at the bbq.  Happy Labor Day weekend and I hope you enjoy these last moments of summer! 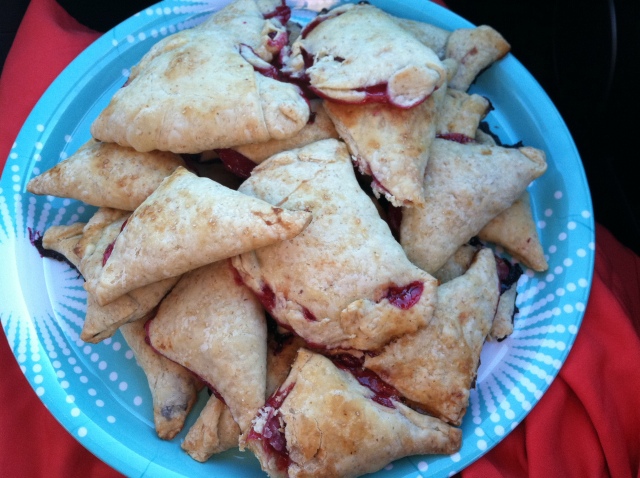 Cook blueberries, tapioca flour, cinnamon and sugar in a 2-quart heavy saucepan over moderate heat, stirring frequently, until mixture just boils and is thickened, about 5 minutes. Transfer to a shallow bowl to cool.

Roll out half of dough 3/4 inch thick on a lightly floured surface with a lightly floured rolling pin into a 16- by 11-inch rectangle, then trim into a 15- by 10-inch rectangle, reserving scraps. Cut into 6 (5-inch) squares. Place a heaping tablespoon of fruit filling in center of 1 square. Moisten edges of square with milk and fold into a triangle, pressing edges to seal. Transfer to a lined baking sheet and press tines of a fork around edges of triangle. Make 5 more triangles in same manner, arranging them 1 inch apart on baking sheet. Repeat with remaining dough and filling, rerolling all of the scraps together once to make 12 triangles total.

Brush triangles with milk and sprinkle with remaining 2 tablespoons raw sugar. Bake, switching position of pans halfway through baking, until pies are golden, about 30 minutes total. Transfer pies to racks to cool.

Blend together flour, butter, shortening, and salt in a bowl with your fingertips or a pastry blender (or pulse in a food processor) just until mixture resembles coarse meal with some small (roughly pea-size) butter lumps. Drizzle 3 tablespoons ice water (for a single-crust pie) or 5 tablespoons for a double-crust pie evenly over mixture and gently stir with a fork (or pulse) until incorporated.

Squeeze a small handful of dough: If it doesn’t hold together, add more ice water 1/2 tablespoon at a time, stirring (or pulsing) until incorporated. Do not overwork dough, or pastry will be tough. Turn out dough onto a work surface. For a single-crust pie, divide dough into 4 portions; for a double-crust pie, divide dough into 8 portions. With heel of your hand, smear each portion once or twice in a forward motion to help distribute fat. Gather all dough together with pastry scraper. For a single-crust pie, press into a ball, then flatten into a 5-inch disk. For a double-crust pie, divide dough into 2 pieces, with one slightly larger, then form each into a ball and flatten each into a 5-inch disk. If dough is sticky, dust lightly with additional flour. Wrap each disk in plastic wrap and chill until firm, at least 1 hour.

6 thoughts on “final burst of summer”