A coworker of mine has been very generous with sharing her garden with me this summer and lately she has had an abundance of zucchini.  Apart from zucchini bread I have only ever had zucchini in savory dishes so when she mentioned to me that she had recently eaten a delicious brownie made with zucchini I was intrigued and did a little interweb research.  The best-looking recipe I came across also happened to be gluten-free and refined-sugar-free.  What?!  Since I have been getting myself out of bed at 5 in the morning three days a week lately for a bootcamp class both of these things appealed to me so as not to undo all the good I’ve been doing.

Now, normally “healthy” and “baked goods” are not words that should be used together in a phrase but in this case it works.  And the brownies were so easy to make!  Four simple steps.  Anyone can handle that!

In place of sugar the recipe called for raw honey and instead of flour there was almond butter.  I happen to love almond butter and generally keep it in stock when I want a break from peanut butter so already had some on hand. 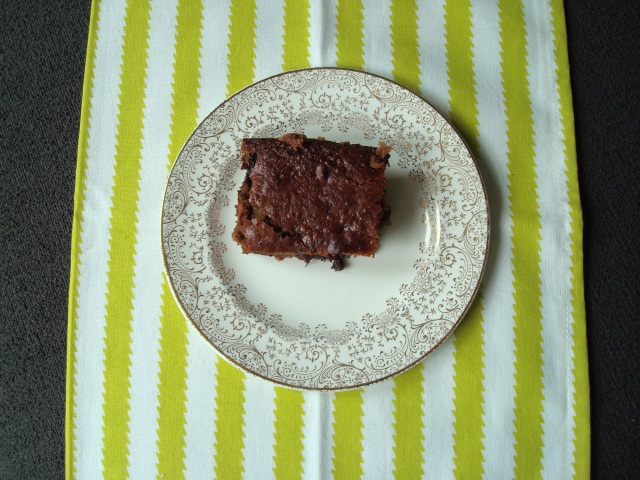 The results were moist brownies with a hint of cinnamon and nutmeg.  If you want a rich, dense, chocolate-y brownie, look elsewhere, but if you want a sweet treat that actually isn’t that bad for you health-wise, this is your dish.  I think it may inspire me to sneak vegetables into sweet baked goods again…

Combine all the ingredients into a large bowl and mix everything together.

Pour into a greased 9×9 baking pan.

Bake for 35-45 minutes, or until a toothpick comes out clean.