Would I like to work in a kitchen that is light and airy and open?  Of course!  Would I like to cook/bake with the finest appliances?  A Sub-Zero fridge perhaps, and a Wolf range?  You bet I would!  A kitchen with an island that goes on for miles and miles?  Sign me up!  A kitchen that looks much like the one below (courtesy of hgtv.com)?  Yes please!

But that’s not reality.  At least not until I strike it rich by playing the Lotto or sell so many baked goods on the etsy site I am contemplating opening (you know, in my spare time) that I can afford to do so.  In other words, it’s not likely to happen anytime soon.

I thought it might be fun to share images of some of the kitchens I have inhabited over the years and  yes, okay, maybe I’m stalling a little bit.  I just moved this past weekend and even though I had great ambitions of cooking and baking up a storm upon unpacking, it just didn’t quite happen.  I was tired, I’m sorry.  I will amend that in the near future, I can assure you!

I couldn’t go too far back in the old archives because a few of the apartments I’ve lived in over the years just didn’t have kitchens worth photographing and/or photos were taken before I had a digital camera (yes Virginia, there was life before digital cameras) and I don’t have a scanner and therefore no way to share the pictures on this here blog.  So, we’ll start five years ago in my Brooklyn kitchen: 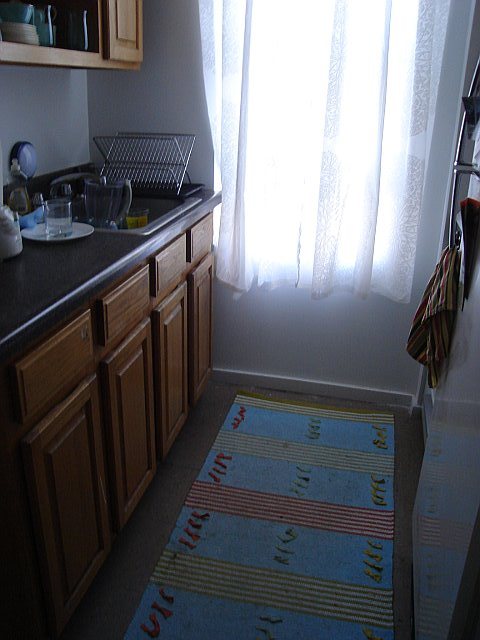 As you can see it was a galley style kitchen and actually relatively spacious for NYC.  It had good sunlight and ventilation from the large window and the fridge and the stove were conveniently located side-by-side (as if there were another option for placement!)  I had people over for dinner frequently in this kitchen and even hosted a few small food-related parties that I deemed to be successes.  Something you can’t tell based on the photos: we had a little bug problem in this apartment.  I’ll spare you the details but you can probably guess just what kind of insect it was…  But nevermind– I’d never let a little bug get in the way of making magic in the kitchen! 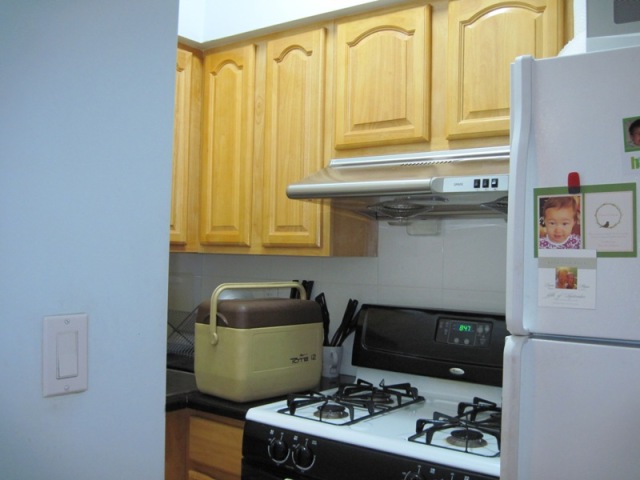 Next we have quite possibly the tiniest kitchen that’s ever existed.  See where the cooler is sitting?  That was the entire section of working counterspace– all one square foot of it.  What is hidden by the blue wall on the left is the sink and to the right of the fridge was the door to my bedroom.  And this was in a sixth-floor walk-up in Chinatown.  But I loved it!  In fact, it’s one of my favorite apartments ever.  And yes, in case you were wondering, I sure did do some baking in this teensy, tiny, little space.  Cakes, pies, cookies, bread.  All prepared on one square foot of counterspace.  Incredible!

Then I moved to Wisconsin where space was not a problem.  In fact my next kitchen was so large I could have easily fit an elephant and a giraffe and probably a small whale too and they all could have lived harmoniously together without ever rubbing elbows.  (Do whales even have elbows?)  What did I not love about the kitchen?  The small oven (never could have pulled off a Thanksgiving meal here…) and the knotty pine.  Yes, it did sort of have a kitschy 1950’s appeal and on occasion I did feel like I was inhabiting Betty Draper’s kitchen (minus Don Draper, bummer) but most of the time I just felt like I was in a log cabin in northern Michigan on a long summer weekend waiting to swat some flies away from the food.  But, I did manage to bake award-winning brownies in this kitchen and that’s nothing to snuff at.  And oh man, just look at all that space! 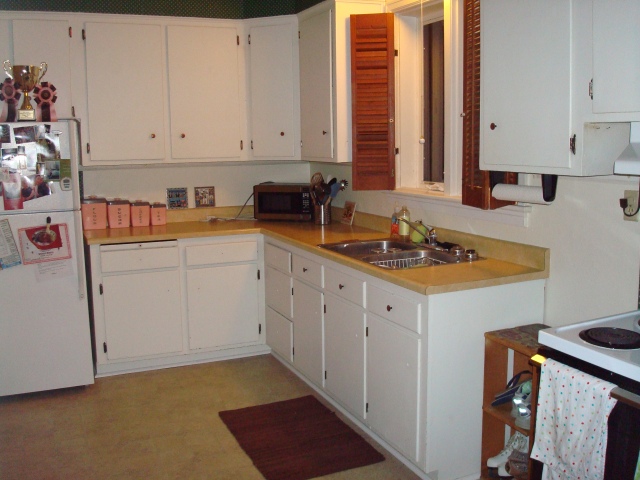 And that brings us to my brand new (but not-so-new) kitchen.  It’s smaller than the last but that was bound to happen.  It still has adequate counter space and storage.  Yes, it has some awful dark green 1980’s wallpaper with a coordinating decorative border that is barely visible in this photograph but you know what?  I can deal with that.  I will still cook and bake some wonderful things in this kitchen and fill the bellies of the people I love and hopefully bring a smile to their faces too.  Because it doesn’t matter  what kind of space you have to prep food in as long as you have passion for what you’re doing.  But if anyone wants to buy me a Wolf stove one of these days I would certainly not be opposed…

7 thoughts on “kitchens past, present and future”